Where's My Water? Wiki
Register
Don't have an account?
Sign In
Advertisement
in: Articles in Maintenance, Characters, Where's My XiYangYang?,
and 4 more 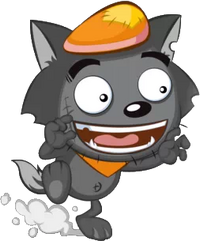 Wolfie has been shown to be smart (especially in the field of mechanics) and somewhat cunning, despite his clumsiness. This can be seen multiple times where he has created various inventions, including traps and vehicles. He has also been able to trick the goats on occasion, despite not being successful most of the time in the end.

Wolfie is a gray wolf with an orange beret, a sly grin, a yellow neckerchief, black eyebrows, and some light grey on his ears and the tip of his tail. He also has a scar that has been stiched up on the right side of his face, as well as a small curved notch in one of his ears.