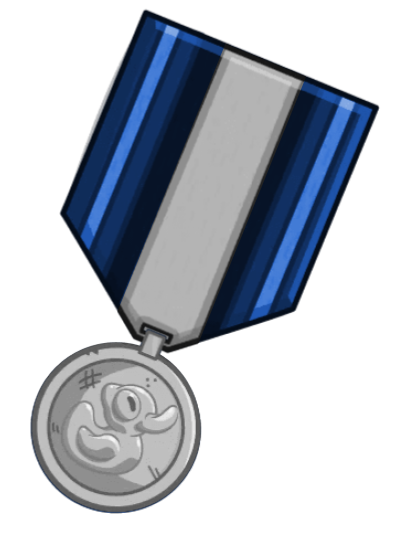 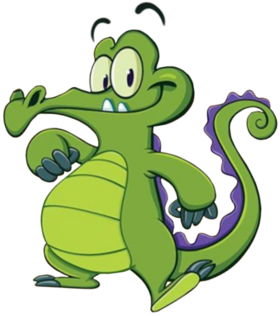 Swampy is an anthropomorphic alligator and the main protagonist of Where's My Water?: Swampy's Underground Adventures.

Swampy is the youngest alligator of the Sewer, he looks out for all the alligators and tends to hang out with his enemy Cranky and Allie the most, but also often with Karl and the duo Pushy and Shovey. Swampy sometimes wears swimming gear before getting into the water [1]. Swampy is arguably one of the most curious alligators in the Sewer, often getting himself into trouble. Swampy loves his adventure companion, Ducky. Swampy and Cranky are still enemies, they both take the lead at times and sometimes show care for each other.

Swampy's appearance is a mix of both his original and sequel counterparts. Swampy takes on the appearance of an anthropomorphic short green alligator that walks on two legs and he is the smallest alligator in the sewer, only slightly shorter than his girlfriend Allie. His eyes have blue irises, and he has three teeth poking out of his mouth; two on the left side, one on the right. He has a long curvy tail with purple rounded scales running down it and his back.

Furthermore, Swampy shares a mixture of features that can be found on either Allie or Cranky. His eyes are the same shape as Allie but his pupils resemble that of Cranky. Also like Cranky, he has spots rather then patches on his arms and the same 3 spots on his legs as Allie. Swampy has blue fingers and toes just like Cranky and purple scales on his back just like Allie. The lines on his belly and his two teeth are virtually identical to that of Allie. Except that Allie's teeth face downward and she has 5 lines rather then 4 on her hourglass shaped belly. His snout also resembles that of Allie's, but its thicker and his nostrils are wide like Cranky. Swampy also has the same looking fingers as Cranky, but they are rather short and stumpy. 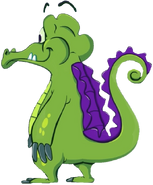 Facing away from the camera 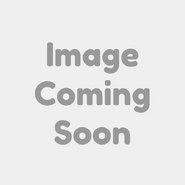 Facing away from the camera (Walking) 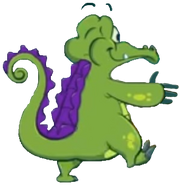 Facing away from the camera (Running)