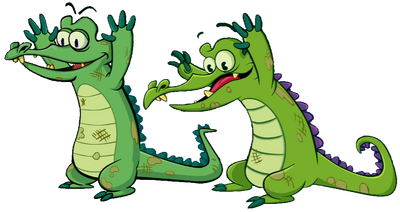 Pushy and Shovey[1] are an alligator duo who have a personal hatred for each other.

Pushy and Shovey are a duo who both hate and love each other. They like brothers- fight against one another but always tag along. Pushy and Shovey often work for Cranky as his minions. Like Karl, they frequently eat bags of rubbish and fool around without a clue of what is going on.

Both take on the appearance of an anthropomorphic, slender, green alligators that walks on two legs making them slightly taller than Allie but shorter than Cranky (However the darker one is slightly taller than his lighter counterpart). The darker one has blue claws, scales, and toes. While the lighter one is the same but he has purple scales. Just like all the Alligators in the sewer, they have four fingers and two toes. 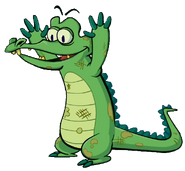 In Out to Dry