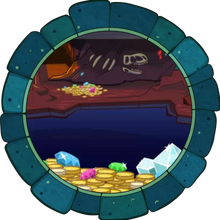 The Pirate Cove is the sixth location in Where's My Water? 2. The previous location is the Woods and the next is the Party.

Retrieved from "https://wheresmywater.fandom.com/wiki/Pirate_Cove?oldid=35522"
Community content is available under CC-BY-SA unless otherwise noted.