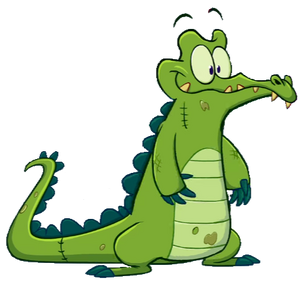 "This gator is gregarious, fun–loving, and always ready to follow the gang"

Karl[1] is a recurring character in the webseries, Where's My Water: Swampy's Underground Adventures. He first appears in the first episode, Meet Swampy.

Karl is a very weak-minded alligator, usually doing dumb actions throughout each episode. He appears to have a big appetite, as he is usually seen eating many things in the show, most notably rubbish bags.

Karl follows Swampy, Allie and Cranky more than any other alligator. He is almost always involved in their activities.

Karl takes on the appearance of an anthropomorphic, slender, green alligator that walks on two legs making him slightly taller than Allie but shorter than Cranky. His eyes have blue irises, and he has 6 teeth poking out of his mouth. He also has a long curvy tail with dark blue rounded scales running down it and his back, his claws and toes are also dark blue. Just like all the Alligators in the sewer, he has four fingers and two toes. 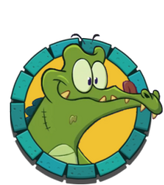 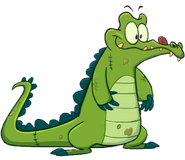 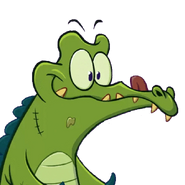