Where's My Water? Wiki
Register
Don't have an account?
Sign In
Advertisement
in: Articles in Maintenance, Episodes

Double Trouble is the eleventh episode of Where's My Water: Swampy's Underground Adventures.

The episode starts with Swampy walking around the sewer, when he discovers a mirror. Curious, he decides to play around with it to find out what it does. While making a scary face at the mirror, he gets scared of his own reflection and runs away, but then he decides to run back at the mirror. However, he ends up entering it completely after tripping on a rock and he starts falling into the mirror's world. As he falls he sees Perry the Platypus.

After he lands to the ground in a different-colored version of the sewer, he gets up and sees Karl; wearing glasses, reading a book and drinking tea, who is smart rather than dumb. Swampy walks away and bumps into an Allie-like Cranky, who attempts to kiss him. He nervously backs away into Pushy and Shovey; who are friends rather than fighting one another. They hug Swampy, only to all be pushed to the ground by a Cranky-like Allie. Swampy attempts to talk with Allie - who fails to recognize him - only for a giant prehistoric look-a-like Rubber Duck to appear and loom over them all. The other alligators retreat behind Allie - who fearfully pushes Swampy towards it, he looks at it, the duck laughs evilly without it's mouth moving and Swampy gasps; he then gets a massive heart attack due to the giant rubber duck and faints into a coma.

Swampy suddenly wakes up in the sewer, finding the other alligators standing over him; back to their normal selves. Swampy sees that there is a crack in the mirror from when he ran into it, and assumes he knocked himself out and dreamed the opposite world. The alligators all leave, none seeing the giant prehistoric rubber duck staring out of the mirror. 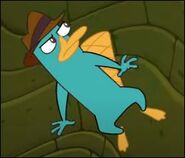 Oh you poor thing, I was worried sick!!!

You broked the mirror glass and faint!!!