Where's My Water? Wiki
Register
Don't have an account?
Sign In
Advertisement
in: Missions, Calling All Agents 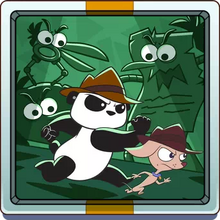 Danger Comes in Threes is the first mission of Calling All Agents in Where's My Perry?. The next mission is The Unblinking Eyes.


1-7: "One Small Bite" This level has an agent file, Agents Challange is available in this level.

Like In the Hot Seat and unlike any of the Perry Missions, this mission has an opening cutscene.

Major Monogram stands besides a button waiting for Carl to give him a danish. However, Carl was tied up by Dr. Doofenshmirtz. Monogram was not pleased by it, but didn’t know why Doof didn’t have a visitor badge.

Dr. Doof reaveals that he has taken over OWCA Headquarters using his army of evil household object agents (created in the Evil Missions). He tells Monogram that his only option is to surrender.

However, Monogram was failing to grasp the problem as he was concerned that none of the evil agents had visitor badges. Carl reminds him as the evil agents walk up to him, then Monogram notices the button. He pushes it, sending Agents Peter the Panda and Pinky the Chihuahua down the tube, where, like with Perry, they run out of power.

Doof told Monogram that his animal agents cannot beat Doof’s evil agents, but Monogram bet that they can. And then they spent hours saying the same words to each other:

Later, Carl decides to put up a contest to settle the argument.

Agent Pinky was set up against Evil Agent Rock to a round of Rock Paper Scissors. Carl told him to use paper, but Monogram shushes him to let Pinky concentrate. He, as so, chooses paper. Pinky wins due to paper being able to beat rock. Doof demanded another event as he thought Pinky cheated.