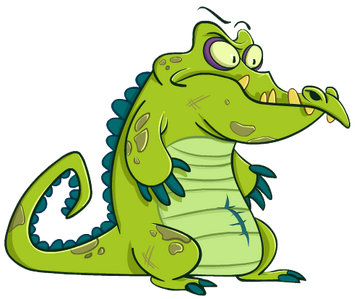 Cranky is an alligator in Where's My Water?: Swampy's Underground Adventures.

Cranky is the Sewer's alpha male and leader of the alligators, as his name suggests, he is very cranky and always shown with an angry face. Like in the games, he eats just about anything he can find from chicken legs to briefcases. Cranky is very lazy and very rarely shows love to other alligators like Swampy as seen in the episode. Cranky often uses Karl, Pushy and Shovey as his minions to perform "dirty work".

Cranky looks very similar to his original game counterpart. He takes on the appearance of an anthropomorphic obese light green alligator (not as light compared to Allie) and he is the largest alligator in the sewer, towering over Swampy and Allie. He has purple ring-like bags on his eyes, 12 teeth sticking out (6 on each side) of his mouth and a distinctive blue scar on his belly. In addition, Cranky's mouth tends to be more "wavy" compared to Swampy and Allie who have simple looking mouths. Cranky's claws, toes are blue and his round, but pointy scales are also blue. Cranky's skin shows dark patches of mud and food, his belly is almost white and shaped like a square. His tail look's a lot like Allie, except it's longer, thicker and pointer; but unlike Allie, the tail faces inward. Just like all the Alligators in the sewer, Cranky has four fingers and two toes. 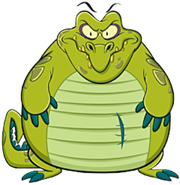 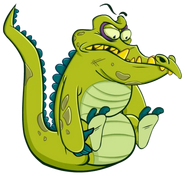 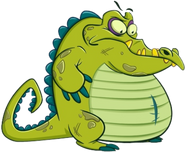