An Agent I Can Trust 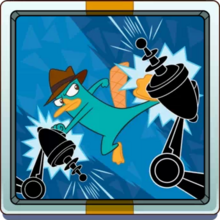 An Agent I Can Trust is the first chapter of Perry's Story. It was released on June 27, 2012. The next mission is A Thousand Times Over.

Perry lands in the seat, facing the screen. Major Monogram suspiciously faces away from him, but realizes that ‘someone (he) can completely trust’ has come in. Then he turns his face towards him, revealing a longer moustache reaching up to his sideburns, and asked him if it makes his head look square. Carl then enters with a stereotypical moustache too, asking if it makes him look competent. Perry jumps off his seat and walks off.