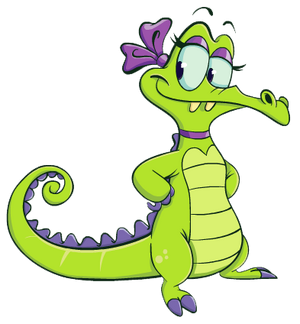 Allie is a light green anthropomorphic alligator and character in Where's My Water: Swampy's Underground Adventures.

Unlike her game counterparts, Allie is seen to play music through various instruments less frequently. She tends to be a wise and kind alligator in the show. She takes charge when necessary, almost "mothering" the other alligators, mostly Swampy and sometimes Cranky. She is one of the most tolerant alligators in the Sewer, and is often the piece maker of the Sewer's alligators.

Allie takes on the appearance of an anthropomorphic, slender, light green alligator that walks on two legs making her slightly taller than Swampy but shorter than Cranky. She is easily recognized by her purple bow on her head as well as a purple choker on her neck. Allie also has purple claws, pointy scales and toes. She also has purple eyeshadow with two eyelashes. Allie has four teeth, two on each side (sometimes two on the right and one on the left), three spots on each leg and two faint stripes on her tail. Her belly is yellowish green with a distinctive hourglass shape resembling that of a dress. Her "S" shaped tail resembles that of Swampy, except its longer and has a ball like tip at the end. Just like all the Alligators in the sewer, Allie has four fingers and two toes.