A Thousand Times Over 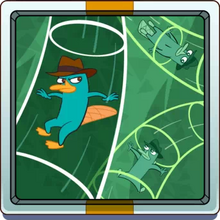 A Thousand Times Over is the second chapter of Perry's Story The previous mission is An Agent I Can Trust and the next is The Puppetmaster.

Perry enters the lair, but his computer screen is dark, and only the eyes of Monogram and Carl could be seen. After a brief moment, the lights turn on, revealing Monogram and Carl with party hats and horns. Monogram congratulates Perry on his 1000th entrance into his lair. Perry looked unamused. Monogram realized he was expecting a briefing. He offers him a cupcake anyway.